VSETT, The New Kid On The Block

Seriously though, where did VSETT come from? We are all so used to seeing the same tired old Zero / Turbowheel / Apollo rebrand scooter frames. Don’t get me wrong, they are solid scooters, but there is this strange thing called ‘innovation’ which most scooter manufacturers don’t seem to care all too much about. There is this other new scooter brand, Viper. I’ve been following the production of the Viper scooter for over a year now, and the Viper looks sweet, but it’s still not for sale anywhere yet. It’s shocking to me that VSETT was able to keep their project so far under wraps. I had never even heard of the brand until a month before the launch. Then, next thing I know, Rev Rides is basically taking preorders for them already. I’m really excited to see a new lineup of scooters in the mix after such a long wait. Even if the VSETT scooters flop as a brand, they will still spark innovation in an otherwise stagnant feeling industry.

At the core of what makes this scooter different is the folding mechanism. I mean, just look at it. On the VSETT 9, 9+, and 10+ scooters it’s like some sort of Ninebot MAX latch on steroids. The latching mechanisms on lots of scooters, including the entire lineup of Zero and Kaabo scooters, are a bit tedious and cumbersome. They can be picky, and even when adjusted properly can still sometimes fail in the face of preventing the dreaded ‘stem wobble’. So far, I haven’t seen any thorough reviews of the VSETT latch but again, I’m just happy to see innovation. Unfortunately this latch is not available on the VSETT 11+ but I wonder, if it’s so great, why not put in on the best performing scooter in the lineup? Hmmm… 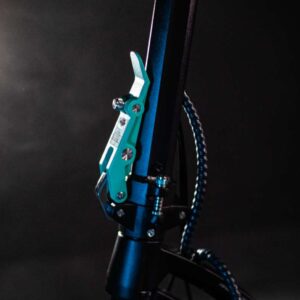 It’s pronounced, “R.F.I.D.” Radio Frequency Identification. *crickets* Oh man, no, you don’t know how it works? Then, you can’t buy one.

Just kidding that’s not how it works.

The people at VSETT had this tech figured out long ago so you wouldn’t have to go to school to learn how to ride your scooter. Let me do my best to break it down for you. Basically, you carry around a little card with you. In your wallet, on your keychain, freeball it in your shirt’s pen pocket, I don’t care. But, if you have the card with you and you tap it to the RFID reader up atop the VSETT handlebars then you can turn the scooter on. It acts a lot like the physical key ignition on the Zero 10x type scooters except you know, just more, next gen. It might not be the end all against scooter theft, but it’s a step in the right direction. 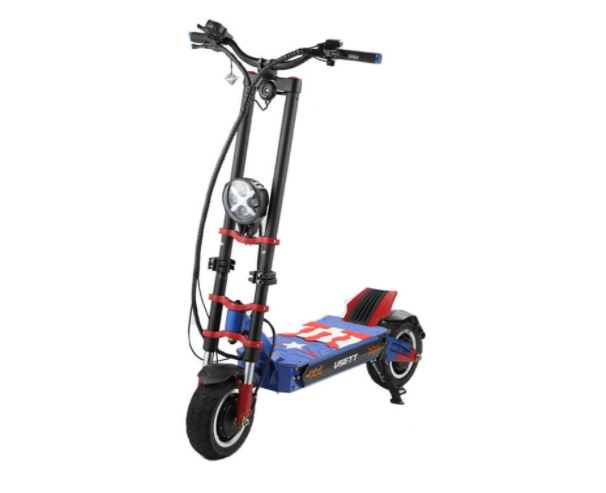 Okay hear me out. Does the VSETT 11+ not look a lot like a Frankenscooter? To me it’s got aspects of a Wolf Warrior, like the front suspension. But at the same time I can see a clearly Zero 11x type battery compartment. Combine that with the red white and blue color scheme and we have what can only be described as the Captain America Wolf 11x. On paper the specs make it sound like a superhero, too. It has one of the biggest batteries I’ve seen in a scooter @ 60volts 42ah. That’s a whopping 2520 watt hour battery which can probably go 70+ miles on one charge. Combine that with the dual 1500 watt motors and I think it’ll be very similar to the Dualtron X as far as speed goes. 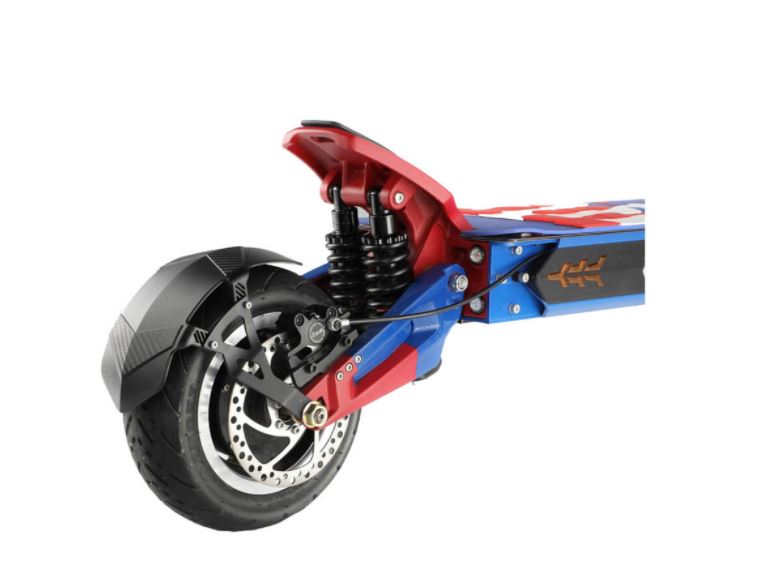 Who’s got the goods?

As far as I can tell right now the only company in the USA that will have these new scooters available for retail purchase is RevRides. I’ve worked with RevRides before and have nothing but good things to say about them, CLICK HERE to see their product release info page. I don’t know of any other retailers that will stock the VSETT line, but whatever you do make sure that you buy your scooter from a retailer that can back the warranty in some way shape or form. That rule especially holds true for first generation product launches. Even the best ideas can flop so if you don’t have a Tony Stark type of wallet, you’d be best off waiting until a few reviews come out before pulling the trigger on a VSETT.

Another place where you might find these scooters is in Colorado! Strange, right? But, a couple friends of mine, Jimmy & Andrew, just did a really great write up on the lineup and even got to do some exclusive testing with the VSETT 10+R. Click here to check out their blog post documenting what they found.

← The Kaabo Wolf King Has Arrived